Five years ago, I received two incredible emails on the same day, both from men whose wives are my friends, describing the surprising delivery stories of their children who were born the day before. Last month, we shared one of them: Sabine’s birth story, which took place just outside the doors of the hospital. I think when you read the second, Glenn’s experience of his son Levi’s birth, you’ll agree that little Sabine and little Levi may be soul mates.

Shayna and I are blessed to announce the birth of our son, Levi. Mother and baby are doing great. Father is still in shock. Under ordinary circumstances, I would probably not offer details of our baby’s birth experience; but this story is kinda remarkable.

On Friday afternoon at 3:00 PM, we had a weekly appointment with our midwives in Las Cruces. As Shayna’s due date was November 16, we were hoping this would be our last check-in before delivery. In passing, I commented to Shayna that it would be easier for all of us if she just gave birth right then and there to save us another trip to Las Cruces, which is 77 miles from our house in Truth in Consequences. Our birth plan had been to labor in T or C and then drive to Las Cruces to have a home birth at our Midwife’s house. Turns out my tongue-in-cheek comment was quite prescient.

Many of you are aware that this pregnancy had not been an easy one. Actually, that’s an understatement – it’s been awful. Shayna was in the unlucky 1-2% of women who experience extreme nausea and vomiting throughout the pregnancy. At the beginning, it wasn’t uncommon for Shayna to throw up 15-20 times per day. She was even hospitalized one time when the puking got totally out of control. Over the past few months, it’s gotten a little better – but she was still throwing up every single day.

So, the appointment on Friday went well, Shayna was 3 centimeters dilated – which is in indication that things are in process, but not imminent. We left Las Cruces at around 6:00 to attend a friend’s 40th birthday party back in T or C; we had a great time and left the party around 9:00. We played some backgammon and then went to sleep.

At around midnight, Shayna experienced her first real contraction…then she threw up. 20 minutes later another contraction and she threw up again. Once more 20 minutes after that. This brought us to around 1:00 AM and we were getting concerned that Shayna was entering into one of her out-of-control situations and I thought she may need an IV. I called the midwives to give them an update and they told me that labor for first-time mothers can last up to 72 hours and that we should start to pay closer attention when she has 2-3 contractions in a 10 minute interval lasting for 1 hour. This is called “active labor”. I hung up the phone, gave Shayna the update, and grabbed a pad to document the contraction pattern. I gave her some medicine to treat the nausea and that’s when the fun began.

The contractions intensified immediately, lasting for a minute each and occurring every 3 minutes. After an hour of increasing discomfort, it was time to call the midwives again. They confirmed that against the odds we had skipped the entire first phase of labor and were already in the active stage. We were thinking it was time to get in the car to start the journey to Las Cruces but the midwives assured us that active labor for first-time mothers usually lasts at least 6 hours so we had plenty of time to pack our bags and hit the road.

At this point, with the contractions still intensifying, we made the call to play it safe and leave immediately. It’s now 3:00AM.

It was a typical New Mexico night with a pitch black, starry sky. I was driving our Subaru Forrester, Shayna was in the back seat. In order to minimize the pain of the contractions, Shayna negotiated herself into a downward dog-like posture with her face buried in some pillows to muffle her screams. Around 20 minutes into the ride, her water broke and the contractions had taken on a new dimension of intensity. It felt to Shayna like the baby was coming.

I called the midwife again to let her know the update and she heard Shayna’s screams. Though she tried to assure me that we’d have plenty of time to make it to her house, something in her voice made me realize I better drive faster. So, now I’m driving 100 MPH and the midwife requested that we stay on the phone – another indication that we were farther along than we hoped. The midwife and I were calculating whether it made sense for her to meet us on the road or for us to keep driving. In agony, Shayna instructed me to keep driving. The midwives, Shayna and I all knew that this was now a race against time.

As many of you know, we live deep in the New Mexico desert – it would be fair to say we live in the middle of nowhere. So, the drive from T or C to Las Cruces brings us into the middle of the middle of nowhere. Cell phone reception on Highway 25 is spotty at best and we ALWAYS experience dropped calls on this ride. I was petrified that my call with the midwife was going to drop and that Shayna may really have the baby in the car. At this point, I asked the midwife what to do if the baby came, and she told me that wasn’t going to happen, but if it did, just wrap a blanket around him and keep driving.

Now, at this time, what I think is one of the most amazing parts of the story happened. Amidst the absurdity of Shayna in the final stages of the final stage of labor, still driving 100 MPH and still 15 minutes from Las Cruces, I look up in the sky and see the most beautiful shooting star I have ever seen. This wasn’t a faint shooting star that disappears after a fraction of a second. This looked more like a comet and it was as if time stood still. At this point I knew 2 things: the baby was about to be born and that everything was going to be OK.

Five minutes later, near the off-ramp of the US70 exit, Shayna could not longer keep him in. Still on the phone with the midwife, after the mother-of-all-contractions, I heard the cry of a baby. Shayna and I were both hysterical as we finally pulled into the driveway where we were met by our 3 midwives. One went right to the baby, one went immediately to Shayna and one enveloped me with the mother-of-all-hugs. I cut the cord and baby was detached from momma. As I said above, mother and baby are doing great. I am still in shock.

We named him Levi Akasha after 3 grandparents who are no longer with us.

This experience, once again, reinforces my sense of wonder and admiration of Shayna’s beauty, strength, determination, focus and resolve. She is the love of my life.

Levi weighed 6 lbs and 4 ounces at birth. He was 18.5 inches long. He is absolutely gorgeous. The buzz is that he looks just like me. 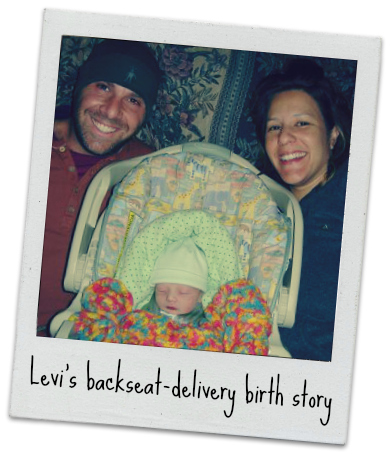 Thank you, Glenn and Shayna, for sharing your amazing story! My dear readers, are you guys feeling as weepy as I do every time I read this?

Happy birthday to these stars! Celebrity birthdays 4 May: See who is celebrating their birthday today A very Happy...